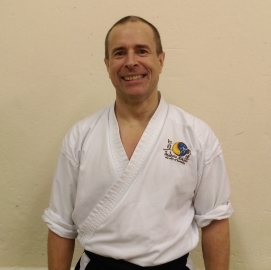 Paul Eyers is a 2nd Dan in Aikido and is a certified British Aikido Board coach level 1. Paul started aikido in Plymouth under Sensei David Worsley of Shin Gi Tai aikido. When he moved to Taunton he joined Makoto Aikido. Paul has attended many courses from visiting Sensei including Larbi Sensei from Belgium, Shihan Takimoto from Japan, Soke Gwynne Jones and Sensei Frank Burlingham.

Paul has an important role as chairman of Aikikai Zen Ten, the organisation that Makoto Aikido is part of that was established with the merger of Makoto Aikido and Broadland Aikido.